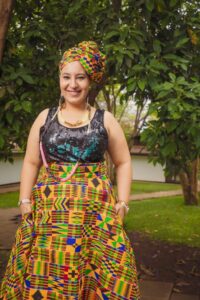 Maha Jouini is a Pan African Author , AI and new technology  expert , She is working as Artificial intelligence executive director at African ICT Foundation  and she is also Regional executive director at Africa Chamber of digital commerce. based in Nouakchott Mauritania. She is the Tunisian Ambassador of African Union Campaign to promote the protocol of Free movement of person in Africa . So far , She joined Youlead summit as a delegate representing North Africa to champion the ACFTA goals and objectives . Master holder from Tianjin University of Science and Technology ( China)  in the field of  Artificial intelligence and its application . Maha served widely In branding Africa in China and she joined DUAPA Africa Platform where she contributed in enhancing Africa-China cooperation and eradicating stereotypes about Africans in Asia. From 2018 into 2020  Maha Jouini served  as a Communication consultant at the African Union Youth Envoy office where she committed to raising awareness about African youth rights, advocating against racism and gender based violence , contributing to AUYE action plan and  explaining the mission African Union Commission among North Africans. From 2015 to 2017 , She  worked before as communication assistant in the African Union campaign to end child marriage in Africa. Thanks to her commitment and her enduring advocacy for girls and woman rights inclusion , The Maghreb Voices platform named her for the personality of the year in 2018 for, her major role as woman rights champion .This year she is nominated by  ‎Junior Chamber International- Tunisia office- for  the JCI Ten Outstanding Young Persons of the World (TOYP) Award in the field of Technology and sciences . In her many publications such “Lover from Africa “ (book published in Cairo by Safsafa Edition 2017 ) and  her television appearances, she has supported the rights of Africans to preserve their heritage.  Story and prose writing are inseparable from Maha’s human rights work and her journeys in her beloved continent , Maha believed that literature is our leverage to emerge girls rights and eradicate harmful practices.

African Center for Artificial Intelligence and Digital Technology is Pan African Think Thank founded in Founded in 2022, The ACAIT is Interested in supporting artificial intelligence policies in the African continent and conducting the work of researchers and those interested in this field in order to achieve the African dream and enhance the confidence of women and youth in their capabilities in the field of programming, development and integrating digital technology.

Contact Us
Our Research
Our Services
Our Projects
About Us